Mary Rose Tudor, born in 1496, youngest sister of Henry VIII went on to become Queen of France, via an arranged marriage to the aged Louis XII at the tender age of 18; according to contemporary accounts she was quite a looker. Louis died just after three months marriage, albeit with a smile on his face!  As a widowed queen, Mary was a valuable asset and so Henry dispatched a trusted courtier, Charles Brandon over to France to retrieve her.

Charles had been brought up in the Tudor household as his father killed at the battle of Bosworth was Henry VII’s standard-bearer.  Though no impropriety  is known between Mary and Charles unbeknown to Henry, Mary had her eye on him and the upshot of it was all she married Charles reminding Henry she married Louis for duty but married for love this time!  Henry incandescent with rage could have had both executed for marrying without his permission but they were eventually forgiven.

The couple now styled as the Duke and Duchess of Suffolk, lived at Westhorpe literally holding court in a pavilion when they visited Bury Fair. Mary however preferred to remind people of her royal status. They had three children survive infancy,  one of these, Frances, would be the mother of the ill-fated Lady Jane Grey. Mary dogged by ill health, succumbed to the Tudor Curse, the sweating sickness, possibly tuberculosis, in 1533. Her lavish funeral, a huge cortege with French heralds was the last great event at the abbey church prior to the dissolution in 1539.

She was laid to rest in a splendid alabaster tomb.  When that fateful day came and the abbey despoiled, she was moved soon afterwards to a somewhat plainer tomb in St Marys. On September 6th, 1784,  it was decided to lower the height of that tomb as it got in the way of the communion table.  At the same time her coffin was opened under the watchful eye of local surgeon Sir John Cullum.  She had two foot long tresses but reports differed as to its colour, red or gold but a lock of it was taken and can be seen today in Moyses Hall Museum, it is golden!  Her simple grave is still in St Marys.

The Confessor’s Gift and Abbott Baldwin

By Martyn Taylor The Confessor’s Gift Edward the Confessor, the son of Ethelred the ‘Unready’ and Emma of Normandy...

The Town rebels and more trouble

By Martyn Taylor In 1327 a year of national unrest with the grim demise of Edward II the town... 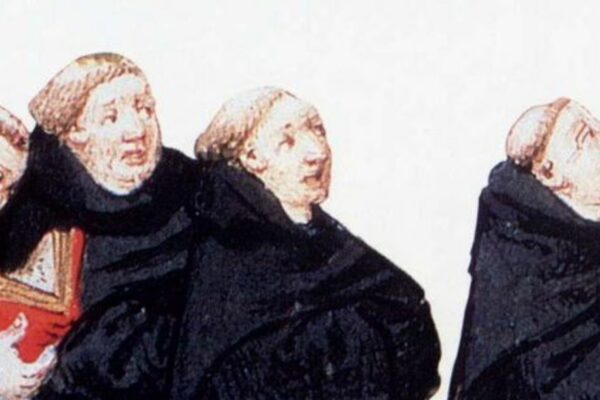 By Martyn Taylor Traditionally the Rule of St Benedict commenced in 529AD when founded  in Italy. The monasteries and...